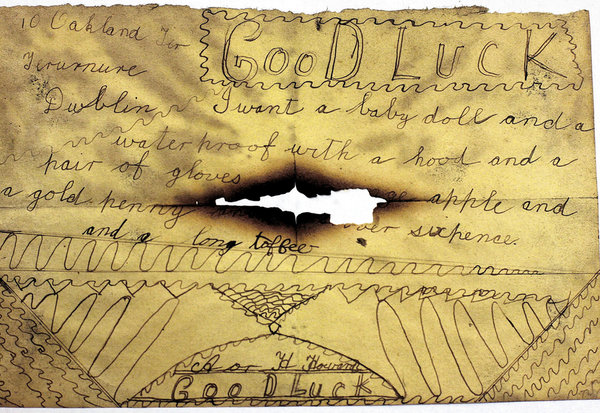 ‘On Christmas Eve 1911, a brother and sister wrote a letter to Santa Claus at their home in Dublin:
‘GOOD LUCK. I want a baby doll and a waterproof with a hood and a pair of gloves and a toffee apple and a gold penny and a silver sixpence and a long toffee.
‘A or H Howard
GOOD LUCK’
‘They placed it in the chimney of the fireplace in the front bedroom. The letter remained remarkably intact and was only slightly burned from fires set in the house over the years. It was discovered by the house’s current occupant in 1992, who kept it as a souvenir of another time
‘According to the 1911 census there were three children living at the address in the year in which the letter was written. The youngest, Hannah, who was ten at the time, and Fred (presumably short for Alfred) who was seven, fit in with the initials on the letter.’
- Michael O’Regan and Pamela Duncan, Irish Times
Image by Eric Luke