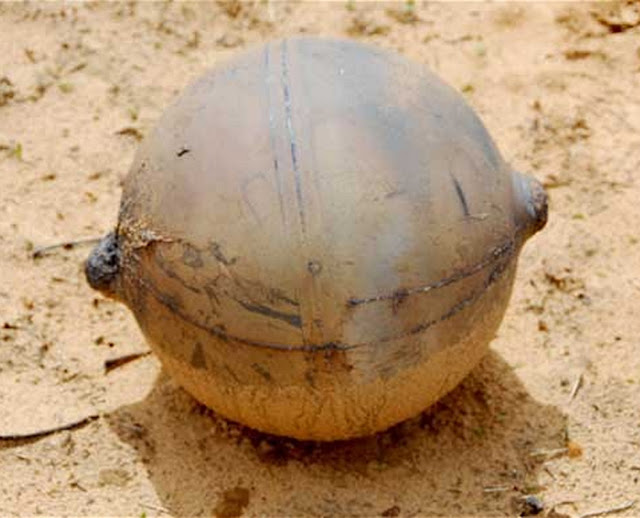 Around mid-November, authorities in Namibia were alerted to the discovery of a hollow sphere that had apparently crashed to Earth from space.
Eyewitnesses reported hearing a series of explosions a few days before the extraterrestrial find. The "space ball" was consequently recovered near a village in the north of the African nation, 480 miles from the capital Windhoek.
The mystery sphere has a diameter of 35 centimeters (14 inches), a rough surface and appears to consist of "two halves welded together," police forensics director Paul Ludik told the AFP news agency.
Ludik also described the object as being made of a "metal alloy known to man," weighing in at six kilograms (13 pounds). "It is not an explosive device, but rather hollow, but we had to investigate all this first," he added.
Baffled, the Namibian police have appealed to NASA and the European Space Agency for an explanation.
So what could it be? Assuming it does originate from space, is it a component from a top secret space weapon? Space hopper? Or could the explanation be a little more... alien?
Sadly, we won't be seeing the Men In Black flying to Windhoek any time soon. This hollow sphere will immediately strike a chord with any space expert.
Exhibit A looks like a dusty "Composite Overwrapped Pressure Vessel" (or COPV for short) and although it did drop from orbit, it's simply an exotic-looking chunk of space junk.
Read More
Tags News
Newer Post Older Post Home