The Lion Man Of Hohlenstein Stadel 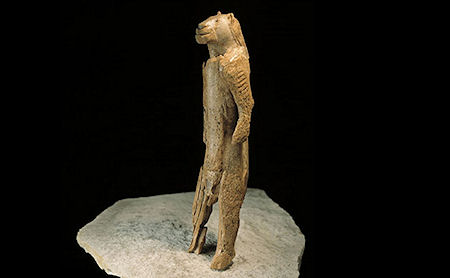 More than 30 000 years ago, at the beginning of the upper paleolithic age, the suebian mountains have been part of the living area of the early anatomically modern humans (Homo sapiens sapiens). They crossed the valleys marked by the ice age in small groups tracking animals like mammoth, reindeer and wild horse. In the caves we find evidence of their residence, as traces of campfire, tools, weapons and jewelry made out of stone, bone, antler and ivory.
Furthermore, in four caves several small figures have been discovered. Most of them are entirely sculptured. These figures carved with stone tools out of mammoth ivory represent the worldwide eldest objects of mobile art. They show the most important animals to hunt, but also the most dangerous individuals, as the cave-bear and the cave-lion, which have been admired for their force and strength. This fascination was expressed through the lion man, the biggest and most spectacular of the ivory figures, excavated in the Hohlenstein-Stadel - cave in the valley of the Lone.
This statuette masterly sculptured out of a mammoth tusk reconciles animal and human attributes. The animal part is represented by the lion-head, the long shapedbody and the arms formed like hind legs, the human part by the legs and feet, as well as the upright position. One cannot decide whether the statue was characterized as feminine or masculine, because it is only preserved only in fragmentary form.
The fantastic creature of the lion man represents a unique relic which refers to the intellectual and religious state of mind of the humans during the last ice age. Nevertheless their certainly complex view of the world which reflected the daily struggle with nature cannot be deciphered anymore.