LHC: Higgs boson 'may have been glimpsed' 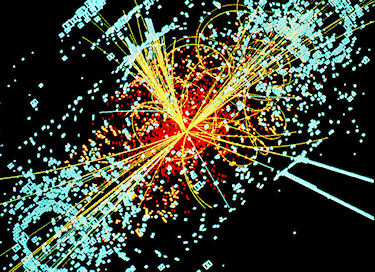 By Paul Rincon Science editor, BBC News website, Geneva
The most coveted prize in particle physics - the Higgs boson - may have been glimpsed, say researchers reporting at the Large Hadron Collider (LHC) in Geneva.
The particle is purported to be the means by which everything in the Universe obtains its mass.
Scientists say that two experiments at the LHC see hints of the Higgs at the same mass, fuelling huge excitement.

But the LHC does not yet have enough data to claim a discovery.

Finding the Higgs would be one of the biggest scientific advances of the last 60 years. It is crucial for allowing us to make sense of the Universe, but has never been observed by experiments.

This basic building block of the Universe is a significant missing component of the Standard Model - the "instruction booklet" that describes how particles and forces interact.
Two separate experiments at the LHC - Atlas and CMS - have been conducting independent searches for the Higgs. Because the Standard Model does not predict an exact mass for the Higgs, physicists have to use particle accelerators like the LHC to systematically look for it across a broad search area.
At a seminar at Cern (the organisation that operates the LHC) on Tuesday, the heads of Atlas and CMS said they see "spikes" in their data at roughly the same mass: 124-125 gigaelectronvolts (GeV; this is about 130 times as heavy as the protons found in atomic nuclei).

"The excess may be due to a fluctuation, but it could also be something more interesting. We cannot exclude anything at this stage," said Fabiola Gianotti, spokesperson for the Atlas experiment.