Is NASA about to announce the discovery of extraterrestrial life? 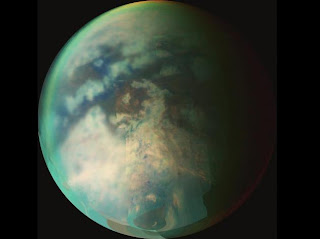 NASA is bringing together a geologist, an oceanographer, a biologist, and an ecologist for a press conference on Thursday to talk about an astrobiology discovery that "will impact the search for evidence of extraterrestrial life." Yeah, this could be major.
Blogger Jason Kottke did some inspired sleuthing regarding what Thursday's press conference might be about. He discovered the expertises of the various people involved include the interaction of geology and life on alien planets (specifically Mars), photosynthesis using arsenic, Saturn's moon Titan as an early Earth environment, and the chemistry of life, including in places without carbon, water, or oxygen.
Taking that all together and combined with the current blitz of news from NASA's Cassini probe around Saturn, Kottke guesses the announcement might have something to do with the discovery of arsenic on Titan and, quite possibly, some primitive bacterial form of life using it for photosynthesis.
Considering NASA's claim that this will impact our search for alien life, I'd have to figure this has something to do with expanding the definition of "life as we know it", suggesting more elements than we previously thought possible can be used as the raw materials for life. All this, of course, is just speculation - we'll be listening in to the press conference on Thursday and have the news for you as it breaks.
[NASA via kottke.org]
Tags News, society
Newer Post Older Post Home