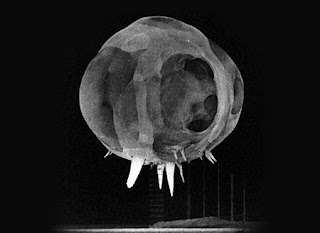 The face of atomic death just one second away from unleashing its absolute destruction.
Only one millisecond after the bomb explodes, this 65.6-foot (20 meters) ball of fire appears in midair, with spikes that look like rotten teeth or stalactites of fire (called the rope trick effect).
The explosion was captured by a Rapid Action Electronic camera—a high speed device designed to photograph nuclear explosions just milliseconds after ignition.

The rapatronic camera, as it is called, was created by Harold Edgerton in the 1940s using two polarizing filters and Kerr cell instead of a shutter, which is too slow for this job. A Kerr cell is a panel that changes its polarization depending on the voltage applied. This acts as a very high speed shutter, which allows the perfect exposition to capture this moment. [Wikipedia via Damn Interesting via Petapixel]