What would happen if I drilled a tunnel through the center of the Earth and jumped into it? 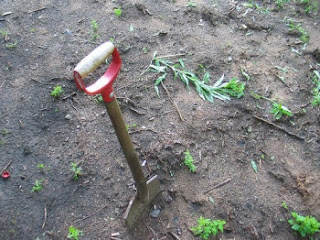 Although it would be impossible to do this on earth, you actually could do this on the moon. The moon has a cold core and it also doesn't have any oceans or groundwater to mess things up. In addition, the moon has no atmosphere, so the tunnel would have a nice vacuum in it that eliminates aerodynamic drag.
So, imagine that the tunnel through the moon is 20 feet (7 meters) in diameter. Down one side is a ladder. If you were to climb down the ladder, what you would find is that your weight decreases. Gravity is caused by objects attracting one another with their mass (see Question 232). As you descend into the tunnel, more and more of the moon's mass is above you, so it attracts you upward. Once you climbed down to the center of the moon you would be weightless. The mass of the moon is all around you and attracting you equally, so it all cancels out and you would feel weightless.
If you were to actually leap into the tunnel and allow yourself to fall, you would accelerate toward the center to a very high speed. Then you would zoom through the center and start decelerating. You would eventually stop when you reached the tunnel's lip on the other side of the moon, and then you would start falling back down the tunnel in the other direction. You would oscillate back and forth like this forever.
If you could do this on earth, one amazing effect would be the ease of travel. The diameter of the earth is about 12,700 kilometers (7,800 miles). If you drilled the tunnel straight through the center and could create a vacuum inside, anything you dropped into the tunnel would reach the other side of the planet in just 42 minutes!
-via science.howstuffworks.com
Tags News, society
Newer Post Older Post Home