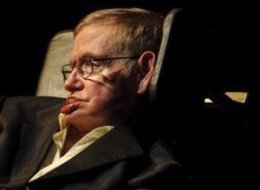 TORONTO - Stephen Hawking says the colonization of outer space is key to the survival of humankind, predicting it will be difficult for the world's inhabitants "to avoid disaster in the next hundred years."
WHERE TO GO? SEE OPTIONS BELOW
The renowned astrophysicist explores some of the most remarkable advancements in technology and health with the new U.K.-Canadian series "Brave New World With Stephen Hawking," debuting Saturday on Discovery World HD.
Before its premiere, he discussed the earth's most pressing concerns in an email interview with The Canadian Press from Cambridge, England, declaring space exploration to be humankind's most urgent mission.
"We are entering an increasingly dangerous period of our history," said Hawking, who has Lou Gehrig's disease, leaving him almost completely paralyzed and unable to speak.
"Our population and our use of the finite resources of planet Earth are growing exponentially, along with our technical ability to change the environment for good or ill. But our genetic code still carries the selfish and aggressive instincts that were of survival advantage in the past. It will be difficult enough to avoid disaster in the next hundred years, let alone the next thousand or million.
"Our only chance of long-term survival is not to remain lurking on planet Earth, but to spread out into space."
-Read More