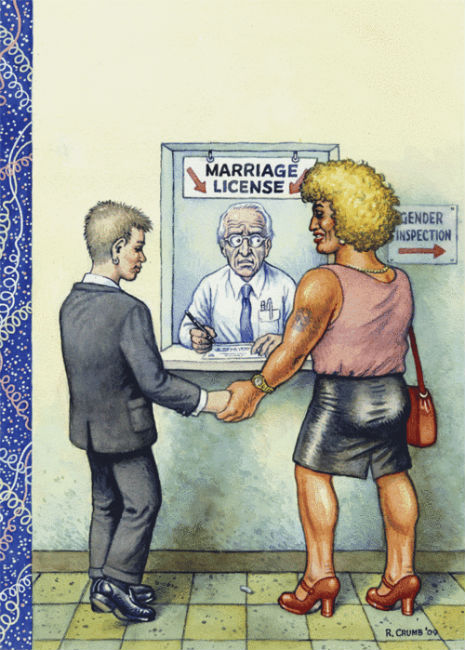 Nadja Sayej got the bottom of why the New Yorker didn’t use this art by Robert Crumb: They never told him...

Did the rejection offend you?
I’m in a privileged position because I don’t need the money. When you go to the cover editor’s office, you notice that the walls are covered with rejected New Yorker covers. Sometimes there are two rejected covers for each issue. I don’t know what the usual policy is, but I was given no explanation from David Remnick, the editor in chief, who makes the final decisions.

Has the New Yorker attempted to commission work from you since this cover?
Yeah, Françoise [Mouly, the art editor] keeps mailing me these form letters, which they send to various artists they like to use. It says something like, “OK, so here are the topics for upcoming covers.” They send it out a couple of times a year or something. But it’s a form letter, not a personal letter.

Did you receive an apology?
An apology? I don’t expect an apology. But if I’m going to work for them I need to know the criteria for why they accept or reject work. The art I made, it only really works as a New Yorker cover. There’s really no other place for it. But they did pay me beforehand—decent money. I have no complaint there. I asked Françoise what was going on with it and she said, “Oh, Remnick hasn’t decided yet…” and he changed his mind several times about it. I asked why and she didn’t know. Several months passed. Then one day, I got the art back in the mail, no letter, no nothing.


The Gayest Story Ever Told (Vice)
Via