Hubble directly observes the disc around a black hole 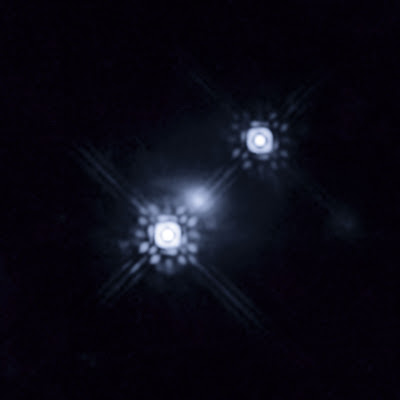 A team of scientists has used the NASA/ESA Hubble Space Telescope to observe a quasar accretion disc — a brightly glowing disc of matter that is slowly being sucked into its galaxy’s central black hole. Their study makes use of a novel technique that uses gravitational lensing to give an immense boost to the power of the telescope. The incredible precision of the method has allowed astronomers to directly measure the disc’s size and plot the temperature across different parts of the disc.
An international team of astronomers has used a new technique to study the bright disc of matter surrounding a faraway black hole. Using the NASA/ESA Hubble Space Telescope, combined with the gravitational lensing effect of stars in a distant galaxy[1], the team measured the disc’s size and studied the colours (and hence the temperatures) of different parts of the disc. These observations show a level of precision equivalent to spotting individual grains of sand on the surface of the Moon.
While black holes themselves are invisible, the forces they unleash cause some of the brightest phenomena in the Universe. Quasars — short for quasi-stellar objects — are glowing discs of matter that orbit supermassive black holes, heating up and emitting extremely bright radiation as they do so.
“A quasar accretion disc has a typical size of a few light-days, or around 100 billion kilometres across, but they lie billions of light-years away. This means their apparent size when viewed from Earth is so small that we will probably never have a telescope powerful enough to see their structure directly,” explains Jose Muñoz, the lead scientist in this study.

Until now, the minute apparent size of quasars has meant that most of our knowledge of their inner structure has been based on theoretical extrapolations, rather than direct observations.
-READ MORE