Greece and the dictatorship of finance 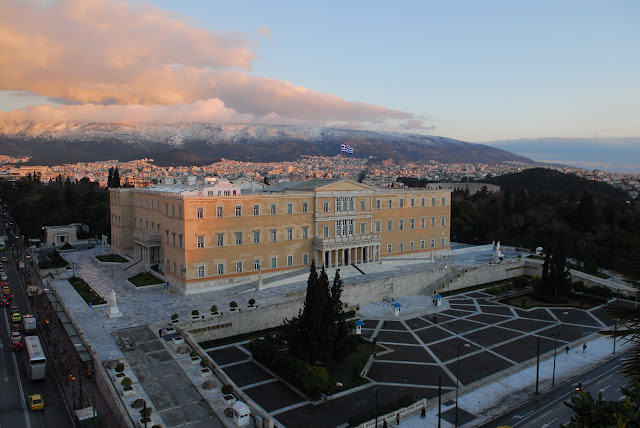 Hellenic Parliament from high above
Ancient Athens is considered to be the cradle of European democracy. Modern Athens is threatening to become its grave. The events that have rocked Greece in recent days are a lesson and a warning for all of Europe.
Three weeks ago a two-day general strike brought the country to a halt. Since then there has been one crisis summit after another—in Athens, Brussels, Cannes. The result is a new government in Greece without any democratic legitimacy intent on imposing the dictates of the financial markets upon the working population.


If one regards democracy to be the determination by the broad masses of the people of their own destiny, or even just the composition of a government, then there is no longer any democracy in Athens. There is no longer the pretense that the sovereign power is the people. It is rather the “troika,” consisting of the European Union (EU), the International Monetary Fund (IMF) and the European Central Bank (ECB). The prospective new prime minister, Lucas Papademos, a former vice-president of the ECB, has been selected by, and is answerable to, the troika.

What is happening in Athens is increasingly the rule rather the exception. In recent months the four other highly indebted countries in the euro zone—Ireland, Portugal, Italy and Spain—have either gone through, or are on the verge of, a change in government. On each occasion the initiative came from the representatives of finance capital and big business. The most important prerequisite in the selection of each new government is its ability to implement unpopular economic measures while resisting any concessions to public pressure.
Sooner rather than later other European countries will be the victims of the same process. In France, the Fillon government has just announced a new austerity program of over €65 billion. And export-oriented Germany is more dependent than any other country on the rest of Europe.

The situation is reminiscent of Germany in the 1930s. Then, German Chancellor Heinrich Brüning, a centrist politician, sought to impose the impact of the international financial and economic crisis on the population with drastic austerity measures. He ruled through emergency measures, relied on the powers of the president and the parliamentary support of social democracy, and suppressed opposition to his austerity policies with brutal police operations. Brüning paved the way for the rise of the Nazis and their subsequent takeover of power.
The development in Greece is heading in the same direction. This follows inexorably from the logic of the “government of national unity.” Declaring its austerity program to be an expression of supreme national interests, the government will denounce all resistance as treason to be forcibly suppressed. The military will be encouraged to take over the reins of power, as it did in 1967. The sudden dismissal of the senior military leadership by outgoing Prime Minister George Papandreou is a warning in this regard.

The emergence of dictatorship in Greece and throughout Europe can be prevented. The ruling elites are divided and weak, and opposition is growing to their attacks. But this resistance at present lacks a clear perspective, while the ruling elites are quite conscious of their interests and have sophisticated means of paralyzing and suppressing resistance.
In the front rank are the social democratic parties, which have long ceased to represent the interests of workers and become advocates of cuts and austerity measures with no less vehemence than their conservative counterparts.

Behind them stand the trade unions, which work closely with the EU, national governments and business federations to support austerity programs and systematically suppress any international solidarity with the Greek workers.
At the recent G20 summit, which sealed the change of government in Greece, the unions of the participating countries (bearing in mind that unions are banned in one G20 country—Saudi Arabia) and the employers’ association (Business 20) issued a joint statement in which they reaffirmed their close cooperation.
Signed by the secretary general of the International Trade Union Confederation (ITUC), Sharon Burrow, and the president of the French employers’ federation, Laurence Parisot, the statement urged the assembled leaders to stress that “priority now has to be put firmly on creating an environment conducive to enterprise and job creation.”
In Greece itself, the unions have limited opposition to austerity measures to short-term protest actions in order not to endanger the PASOK government. This in turn enabled the right wing to take the initiative in the change of government.

Then there are the numerous remnants of Stalinist organizations that operate closely with the trade unions and social democracy and, as in the case of the Greek KKE, whip up nationalist sentiments.
Finally, there are the numerous middle-class groups which declare they are “anti-capitalist” or “socialist,” but collaborate with the social democrats, Stalinists and unions and oppose any break with them. It is these organizations which have sought to dictate the agenda in the “outraged” and “Occupy” movements by raising the slogan of “no politics,” i.e., the deliberate suppression of discussion on the need to build a revolutionary socialist alternative to the existing parties.
Social and democratic rights can be defended only on the basis of breaking with all of these organizations. Strikes and protests, while important, are not enough. The struggle against dictatorship and austerity requires a socialist perspective and the building of a new party. The ruling elites cannot be swayed by pressure from the streets. They have too much to lose. They are determined to defend their privileges and wealth in a capitalist system which has plunged the world into crisis.

The European debt crisis is not due to a lack of money. According to Handelsblatt, wealthy Greek individuals have stashed an estimated €560 billion in foreign accounts—almost twice as much as the entire Greek national debt. And the US investment bank Merrill Lynch has estimated that in 2007 no less than three million millionaires resided in Europe, with total assets of €7.5 trillion.
This enormous sum of capital seeks new sources of interest and profit. To use a phrase of Karl Marx, “Capital is dead labor, which, vampire-like, lives only by sucking living labor.” The financial markets demand their daily toll. Increasing amounts of surplus value produced by workers flow into banks, hedge funds and other financial institutions, which themselves produce nothing of value.
Herein lies the importance of the debt crisis. It serves as a mechanism to intensify the exploitation of the working class, decimate government social spending, slash wages and re-establish the types of exploitation which prevailed in the initial stages of capitalism.

A progressive resolution of the crisis is possible only on the basis of transforming existing property relations. The banks, large corporations and major private fortunes must be expropriated, subjected to democratic control and devoted to serving society as a whole. Social needs must take precedence over the drive for profit.
Such measures require a revolutionary movement of the working class. They will meet with the fierce resistance of all the established parties, which are intimately tied to the interests of the financial markets and big business. Supporting the main bourgeois parties will be the trade unions and their pseudo-socialist allies.

A socialist perspective can be realized in the economically and socially closely knit continent of Europe only through the close international collaboration of the working class. The aim must be to build the United Socialist States of Europe. The alternative, as in the 1930s, is the balkanization of the continent and a slide into dictatorship and war.
Peter Schwarz
-via