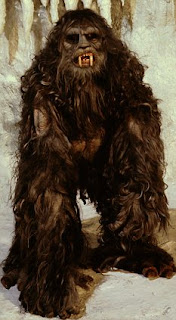 Its legend has long haunted the icy wastes of the Himalayas and Siberia.
Yet for all the mysterious sightings and strange footprints in the snow, the Yeti has proved remarkably elusive to those seeking solid evidence of its existence.
Now, however, the Abominable Snowman has an international team of scientists on its trail in a Russian region which one expert claims is home to around 30 of the creatures.
An expedition and conference – the largest of its kind since 1958 – will this week bring together scientists from Russia and the U.S. who have even agreed to share secret Cold War evidence in the effort to prove the humanoid beasts exist.
It follows a rise in apparent Yeti sightings in the Kemerovo region 3,000 miles – and four time zones – east of Moscow.
One of the most recent was reported by 82-year-old Raisa Sudochakova, who claims her dogs howled in fear and ran when they saw the Yeti.
She said: ‘It was still a tall creature, but not giant. It was covered with long brown-grey hair, like a bear. It wasn’t a bear – I have lived all my life in Siberia and wouldn’t make that mistake. This creature walked like a human, or almost like a human.’ …
via Yeti hunt: Russian and American scientists pool ‘Cold War’ evidence | Mail Online.
Via Xeonophilia