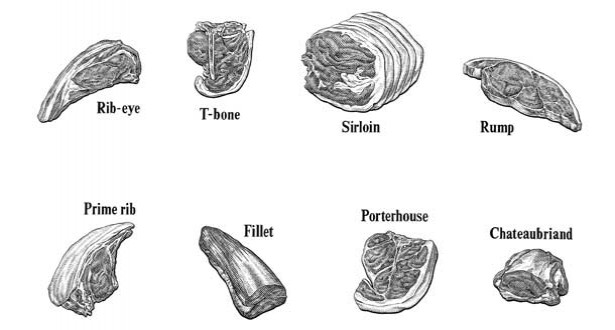 As a consequence of our lacking antlers to sort matters out, man’s competitive nature can lead to all manner of attempted besting between friends. One popular method is over a flame. Not by wrestling on a bonfire, but by outdoing your pal in the cooking of man’s greatest culinary obsession: the steak.

The steak is the connoisseur’s meat dish; a subject of debate, delight and potential disappointment. To encourage the first two and avoid the last, we’ve consulted three prime-cut experts and one wine expert to produce a definitive instruction manual so that you, the antlerless man, can prevail in the battle of the beef.

The rib-eye is the rising star of the steak world. As people have become more steak-conscious, this fatty, flavoursome cut has shot up the popularity charts.
“Our customers’ favourite cut,” says Richard Turner, head chef at London’s famous Hawksmoor steak restaurant. “The fat content gives it a lot of flavour. Cut it at least an inch thick and cook it a bit more than some steaks — medium or medium-rare — so it can absorb the fat. You don’t want fat with fat, so I’d suggest serving with a nice tomato salad. For a 250g steak, you’re looking at 4-6mins for medium-rare, 6-8mins for medium, although times are never precise.”
Fat is key to the rib-eye’s appeal. One of the fore-ribs, it usually has no bone in and no fat around it; instead, it is infused with the stuff. It’s an important factor when buying your steak, as Michael Gale, master butcher at Allens Of Mayfair (Allensofmayfair.co.uk), explains: “You want good marbling [little rivers of fat running through the meat],” he says. “And there’s a square of fat at one end. Make sure that’s large. Any steak except fillet should be more than 21 days old, but avoid anything older than 35 days.”
The wine: Wine trader and expert Jaspar Corbett (Jasparcorbett.com) suggests “something fruity with all that fat, such as Australian cabernet sauvignon from the Margaret River area”.

The language of cuts is a little vague, with variations in names being found from one butcher to the next (thankfully not the case with surgeons). A prime rib steak can be taken from any of the ribs, but can also be sirloin on the bone.
“With prime rib, you’ll get a bigger cut than rib-eye,” says Turner, “often weighing 800-1,000g. It has more flavour than rib-eye, because anything’s better cooked on the bone. I’d also rest it longer and serve with the same sides as the rib-eye.”
“I think it’s better than sirloin,” says Gale. “Again, look for plenty of fat. You will be paying for the bone, too, remember.”
The wine: To wash it down, Corbett suggests something fresh. “Try a Barbera d’Alba from the Piedmont region of Italy, 2008 or older,” he says. “You get an attack of redcurrants, a hint of rose petals and a refreshing cherry flavour left in the mouth.”

“Leaner is better with sirloin,” says Gale. “Fatter steaks tend to have a lot of gristle. It’s definitely an option for the more health-conscious, because the fat, which sits on top of the steak, can be trimmed.”
Located between the rib and the fillet, the sirloin is either a compromise steak or a perfect balance, depending on your tastes. There’s no disputing its popularity, though. In terms of preparation, follow a similar path to the rib-eye, though Turner suggests adding a couple of minutes to the cooking time. Accompaniments, however, can get a little richer.
“I like fat chips and a good béarnaise sauce,” says Francois O’Neill, owner and chef at the Brompton Bar & Grill (Bromptonbarandgrill.com). “You make the sauce with egg yolks, tarragon vinegar, melted butter, cayenne pepper and chopped fresh tarragon.”
The wine: “Have it with a syrah, or shiraz as it’s often known,” says Corbett. “Ideally Chateauneuf du Pape, 2005 or older. Alternatively, a New Zealand Villa Maria syrah. The peppery overtones and taste of grilled meat means you’re drinking what you’re eating.”

Once renowned as the most princely of prime cuts, the fillet’s reputation, not to mention its top-of-the-range price, has come under closer scrutiny in recent years.
“It’s very overrated,” says Gale. “It’s a part of the cow that does very little, so there’s not much flavour. It’s lean and tender, but in my opinion, not good value.”
Our chefs disagree, claiming the fillet and the chateaubriand (the larger, even pricier end of the fillet, commonly served as a steak for two) still have much to offer, and their leanness means they don’t need to age, as there’s little fat to break down.
“It’s so lean that you can add fat,” says Turner. “A nice bone-marrow sauce or anchovy butter. Cook it rare or medium-rare, about 8-10mins. The leanness means it will dry out if over-cooked. Or you can have it raw as steak tartare. A tip: never buy if blood’s visible in the packaging, or if it’s been vacuum-packed.”
“You could also roast it,” says O’Neill. “Brown it on all sides and season with sea salt and ground pepper. Once browned and nicely crusted, place the fillet in a 200C oven for about 12-16mins for medium-rare.”
The wine: “This is all about complementing texture,” says Corbett, “so let’s go to the right bank of Bordeaux for a merlot-led St-Emilion or Pomerol, 2006 or older.”

“Three times more flavour than fillet and a third of the price,” says Gale, keeping well off the fence. “It’s the best everyday steak. Make sure you get your steak cut from the middle of the rump.”
The rump is a real ‘man’s steak’ and a favourite of chefs as well as butchers. Basically a bovine backside, it does more work than most parts of the animal which, while a little tougher, means it has vast amounts of flavour.
“It should always be cut against the grain,” says O’Neill. “I’d suggest grilling it and slicing it before serving it, giving the guest a chance to have their meat cut properly. Serve medium or medium-rare over roasted root vegetables and with a good salsa verde sauce.”
The wine: “Throw the kitchen sink at the rump,” says Corbett. “Those caramelised flavours will go wonderfully with a big, rich Californian zinfandel, a huge black grape.”

The difference between a porterhouse and a T-bone steak is negligible. Both part-sirloin, part-fillet ‘double steaks’, the T-bone is at the thicker end of the spine, meaning you get more bone, less meat (one reason that Gale “wouldn’t sell it to his mother”). However, it is popular with chefs and many customers.
“It’s the best of both worlds,” says Turner. “You get a bit less fillet on the T-bone, but it’s still a great steak. As the fillet takes longer to cook, it’ll be rarer than the sirloin, which is perfect. Keep it moving in the pan. Serve with a simple salad.”
O’Neill, who calls them his favourite grilling steaks, adds: “Start them on the grill or in the pan and finish in the oven. You’ll over-sear the outside if you cook the whole process over an open flame or in a pan. I’d also suggest this with chateaubriand. Serve with good chips, garden salad and a sauce of preference.”
The wine: No matter what your opinion, there’s no denying these monster cuts, often flirting with the kilo mark, are in need of some serious washing down. “Let’s go with the other side of Bordeaux and the crux bourgeois — just below the expensive stuff,” says Corbett. “I’d suggest a Chateau Beaumont 2004 or 2005, an oak-aged cabernet sauvignon. You’ll probably need a magnum, mind.”