Around a black hole 12 billion light years away, there's an almost unimaginable vapor cloud of water--enough to supply an entire planet's worth of water for every person on earth, 20,000 times over. 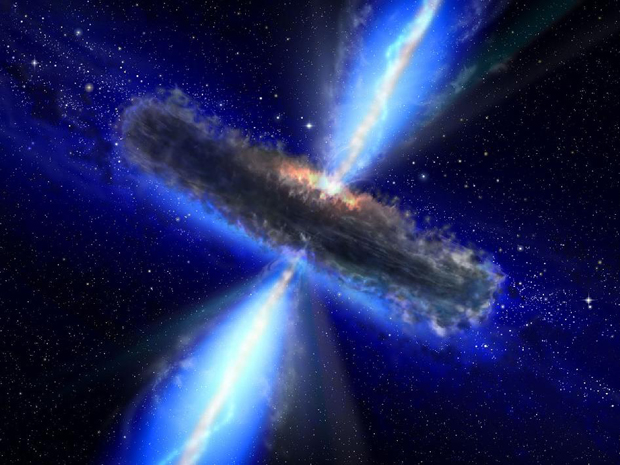 Scientists have found the biggest and oldest reservoir of water ever--so large and so old, it’s almost impossible to describe.
The water is out in space, a place we used to think of as desolate and desert dry, but it's turning out to be pretty lush.
Researchers found a lake of water so large that it could provide each person on Earth an entire planet’s worth of water--20,000 times over. Yes, so much water out there in space that it could supply each one of us all the water on Earth--Niagara Falls, the Pacific Ocean, the polar ice caps, the puddle in the bottom of the canoe you forgot to flip over--20,000 times over.


The water is in a cloud around a huge black hole that is in the process of sucking in matter and spraying out energy (such an active black hole is called a quasar), and the waves of energy the black hole releases make water by literally knocking hydrogen and oxygen atoms together.
The official NASA news release describes the amount of water as “140 trillion times all the water in the world’s oceans," which isn’t particularly helpful, except if you think about it like this.
That one cloud of newly discovered space water vapor could supply 140 trillion planets that are just as wet as Earth is.
Mind you, our own galaxy, the Milky Way, has about 400 billion stars, so if every one of those stars has 10 planets, each as wet as Earth, that’s only 4 trillion planets worth of water.
The new cloud of water is enough to supply 28 galaxies with water.
Truly, that is one swampy patch of intergalactic space.
Equally stunning is the age of the water factory. The two teams of astrophysicists that found the quasar were looking out in space a distance of 12 billion light years. That means they were also looking back in time 12 billion years, to when the universe itself was just 1.6 billion years old. They were watching water being formed at the very start of the known universe, which is to say, water was one of the first substances formed, created in galactic volumes from the earliest time. Given water’s creative power to shape geology, climate and biology, that’s dramatic.


“It's another demonstration that water is pervasive throughout the universe, even at the very earliest times,” says Matt Bradford, an astrophysicist at NASA’s Jet Propulsion Laboratory and leader of one of the teams that made the discovery. (The journal article reporting the discovery is titled, without drama, “The Water Vapor Spectrum of APM 08279+5255: X-Ray Heating and Infrared Pumping over Hundreds of Parsecs.”)
It is not as if you’d have to wear foul-weather gear if you could visit this place in space, however. The distances are as mind-bogglingly large as the amount of water being created, so the water vapor is the finest mist--300 trillion times less dense than the air in a typical room.
And it’s not as if this intergalactic water can be of any use to us here on Earth, of course, at least not in the immediate sense. Indeed, the discovery comes as a devastating drought across eastern Africa is endangering the lives of 10 million people in Somalia, Kenya, and Ethiopia. NASA’s water discovery should be a reminder that if we have the sophistication to discover galaxies full of water 12 billion light years away, we should be able to save people just an ocean away from drought-induced starvation.
The NASA announcement is also a reminder how quickly our understanding of the universe is evolving and how much capacity for surprise nature still has for us. There’s water on Mars, there’s water jetting hundreds of miles into space from Enceladus, one of Saturn’s moons, there are icebergs of water hidden in the polar craters of our own Moon. And now it turns out that a single quasar has the ability to manufacture galaxies full of water.
But it was only 40 years ago, in 1969, that scientists first confirmed that water existed anywhere besides Earth.