A Princess of Mars, by Frank Frazetta 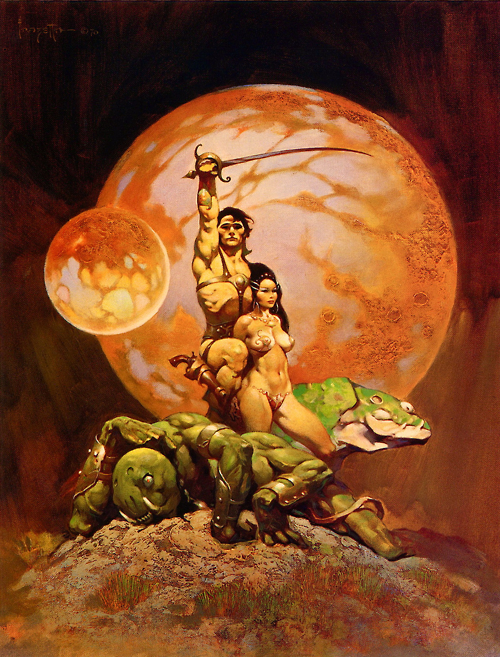 Frazetta didn’t do the illustrations for the first printing of A Princess of Mars, but he later became the definitive illustrator for the entire series of Mars books by Edgar Rice Burroughs. A Princess of Mars was Burroughs’ first novel, actually pre-dating the famous Tarzan series. Set on the world of Mars (or Barsoom, as called by its local inhabitants), the book is a classic example of American pulp fiction, and a prototype for the genre of science fiction, which didn’t really exist at the time(although Jules Verne and H.G. Wells are certainly forefathers of the genre). Wikipedia had this to say about the impact of A Princess of Mars:
"Carl Sagan read A Princess of Mars as a child…This book and its series are noted as early inspiration by many later science fiction authors including Robert A Heinlein, Arthur C. Clarke, and Ray Bradbury. Bradbury admired Burroughs’ stimulating romantic tales, and they were an inspiration for his The Martian Chronicles (1950), which used some similar conceptions of a dying Mars. Burroughs’ Barsoom novels have also been cited as a model for H.P. Lovecraft’s The Dream-Quest of Unknown Kadath."
-source: bannerword.me
Tags Art Stuff
Newer Post Older Post Home