Mediterranean In Perspective - Judd Solo and the Italiano Quartetto 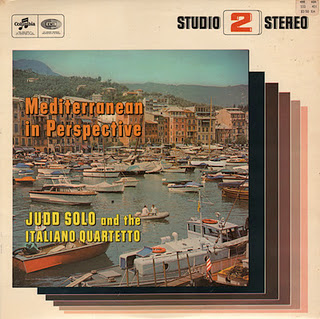 Mediterranean In Perspective
Judd Solo and the Italiano Quartetto
Studio 2 Stereo TWO 108
E.M.I. Records - Hayes - Middlesex - England
1966
via artworkbymanicmark.blogspot.com
This is another example of why I buy a lot of records that most people don't look twice at. There is always a chance the you hear something fun regardless of what the jacket suggests.
This record plays like a groovy space age Three Suns album, but lighter on the accordion.
From the back cover: Guest soloists: Hugo D'Alton, Kenny Baker, J. E. Buck, Jnr., Ronnie Price, Ernie Shear and Manny Winter.
Also from the back cover: ...This system was used in the making of this record – Judd Solo's second LP for E.M.I. Judd has become well-known through his radio and television work, together with his appearances at the London Hilton Hotel. He sings in no less than eight languages, and plays guitar as well as leading his Italiano Quartetto.
This is an obscure LP. The only substantial info I could find was on Kenny Baker, listed as the trumpet player on the album.
Tags DLRS Radio
Newer Post Older Post Home