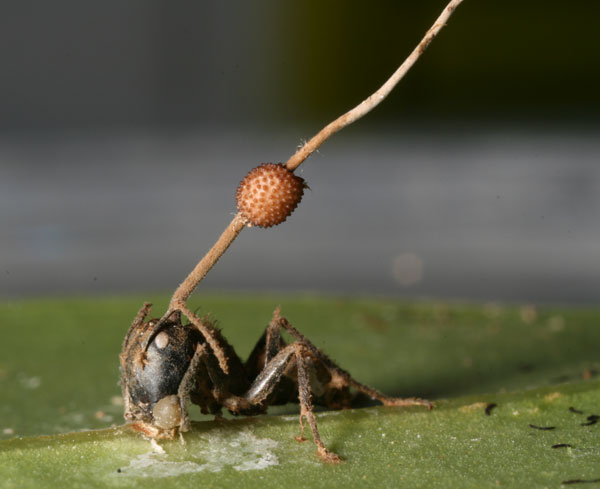 This carpenter ant (Camponotus leonardi) is caught in the throes of a fungus-induced death grip. It has clamped itself to a leaf 25 centimetres above a forest floor in Thailand, and died.
The reason is growing out of the back of its head. The reddish-brown stalk is made by a fungus called Ophiocordyceps unilateralis, which has invaded the ant's body and manipulated its behaviour. The exposed position is ideal for releasing spores.
It turns out this parasitic mind-control is at least 48 million years old. David Hughes of Harvard University and colleagues discovered fossilised leaves of this age in Messel, Germany that bore characteristic "death grip" scars, suggesting that ants once clamped themselves onto them.
It is the first time this sort of behavioural control has been discovered in the fossil record, and supports the idea that the ants and fungi have been locked in an evolutionary arms race for many millions of years.
Journal reference: Biology Letters, DOI: 10.1098/rsbl.2010.0521 (in press)
(Image: David Hughes)
Tags News
Newer Post Older Post Home