"All I was doing was making art. I am very, very scared. I have never hurt anyone, ever."

THE wild boy of Australian art, Adam Cullen, will face court next week on charges of having guns and prohibited weapons in a car he was allegedly driving while drunk.
The Archibald Prize winner was driving his car at Crookwell, near Goulburn, on July 6 when police stopped him, later charging him with multiple firearm and weapons offences: possessing a taser and a slingshot - prohibited weapons - unauthorised possession of a Wesson .357 calibre revolver and possessing unregistered firearms, including a single-barrel shotgun, a Ruger .22 self-loading rifle and a US carbine M1 .30 self-loading rifle. The charges carry up to 14 years' jail.
Cullen, 46, was also charged with mid-range drink-driving. 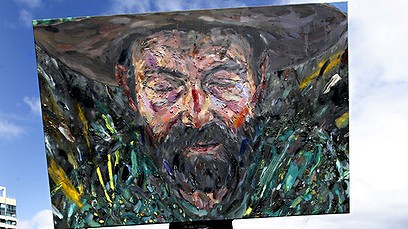 The artist had been preparing for his exhibition, Independent Judiciary (Mother's Milk), about the time he was arrested.
To create work for the show, Cullen fired guns at aerosol paint cans, which then splattered paint on canvases set up behind them. The process was carried out on a property near Goulburn.
The bullet-ridden and spattered canvases, including works entitled Rick O'Sha and .22 Cal X, were shown at the Chalk Horse Gallery in Sydney in August.
Cullen said he had been working on his exhibition when he was pulled over. ''All I was doing was making art,'' he said. ''I know it's a very eccentric thing to be doing, but it was a great show.''
Cullen, who lives in the Blue Mountains, said he was anxious about his court appearance. ''I am very, very scared,'' he said. ''I have never hurt anyone, ever.''
In court papers, the director of the Art Gallery of NSW, Edmund Capon, described Cullen as one of Australia's most acknowledged and recognised contemporary artists.
''Adam Cullen's work is acute and often satirical; his imagery can be quite confronting but it is a powerful echo of so much of contemporary life. Most of all, Adam Cullen is a contemporary artist of great seriousness and to truly pursue his art, he lives what some may see as a peripheral existence. That is often the role of the artist; to experience the extremes in order to incisively observe the commonplace.
''He is certainly no reckless individual but a deeply thoughtful and committed artist,'' Mr Capon wrote on August 1.
Cullen won the Archibald Prize in 2000 for his portrait of the actor David Wenham and has painted Capon's portrait.
He has collaborated on children's books with his friend, the convicted killer Mark ''Chopper'' Read, and once dragged a putrefying pig's head around on his ankle. His subject matter has included prostitutes and criminals. Elton John, Malcolm and Lucy Turnbull and Amanda Vanstone have collected his work.
Oliver Watts, the co-curator of his recent exhibition, described Cullen's bullet-riddled work as ''not violently and passionately made, but safely; they are done on private property, with legal weapons, in a creative not destructive act.''
Cullen is to appear in Downing Centre Court on Thursday. His lawyer, Charles Waterstreet, said: ''He is working well and artistically used guns in his work.''
-via smh.com.au
thanks Nick!
Tags Art Stuff, Daily Collection, News
Newer Post Older Post Home