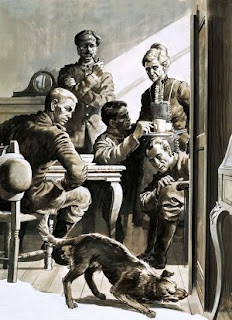 In 1915, after being cut off from his regiment in northern France, British Army private Patrick Fowler found his way to the farmhouse of Mme. Belmont-Gobert in the German-occupied town of Bertry. He implored her to hide him, but she had space only in an oaken cupboard in the living room.
Incredibly, Fowler spent three years and nine months in a space 5.5 feet high and 20 inches deep while more than 20 German musketeers were billeted in the same house. “He was there at times when unsuspecting Germans were actually sitting around the fire in the same room,” reported the New York World in 1927. “Often they came down to the ground floor quarters of the Belmont family and made coffee on the fire there.”
The Germans even made periodic searches. “[A German captain] and his men sounded the walls and floors for secret hiding places, uttered awful threats,” reported Time. “Mme. Belmont-Gobert only sat passive in her sitting room. At last the captain wrenched open the right-hand door of her large black armoire, snorted to see it divided into small shelves incapable of holding a rabbit, banged the right-hand door shut without opening the left-hand door, strode away.”
The Germans finally left Bertry on Oct. 10, 1918, and Fowler returned to his unit. Nine years later, in recognition of her act, the French government granted Belmont-Gobert a pension, and Britain named her a Dame of the Order of the British Empire. The cupboard resides today in the King’s Royal Hussars’ Museum in Winchester.
-via  futilitycloset.com
Image Look and Learn