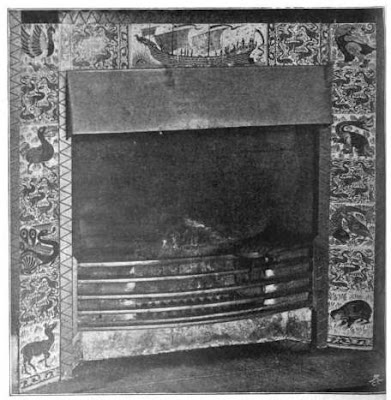 Many of the characters in Lewis Carroll’s stories were suggested by the illustrated tiles that decorated the fireplace in his study at Christ Church, Oxford:
* At top is the ship that the Bellman steered, though “the bowsprit got mixed with the rudder sometimes.”
* At top left is the Lory, who joined in the Caucus-Race in Alice in Wonderland.
* Below the Lory is the Dodo, who claimed a thimble as his prize.
* At bottom left is the Fawn that couldn’t remember its name in Through the Looking-Glass.
* At top right is the Eaglet, another Caucus-Race participant.
* Below the Eaglet is the Gryphon, also from Wonderland.
* At bottom right is the Beaver from “The Hunting of the Snark,” the only creature that the Butcher knew how to kill.
One of Carroll’s child-friends, Enid Stevens, supplied these particulars for The Lewis Carroll Picture Book, published in 1899. “As I sat on Mr. Dodgson’s knee before the fire,” she wrote, “he used to make the creatures have long and very amusing conversations between themselves. The little creatures on the intervening tiles used to ‘squirm’ in at intervals. I think they suggested the ‘Little birds are feeding,’ &c., in ‘Sylvie and Bruno.’”