NASA reported on Thursday that new pictures revealing "dark, finger-like features" on Mars that change seasonally indicate the possibility of flowing salt-water on the Red Planet.
The pictures were captured by its Mars Reconnaissance Orbiter (MRO), a craft launched in 2005.
"NASA's Mars Exploration Program keeps bringing us closer to determining whether the Red Planet could harbor life in some form," NASA Administrator Charles Bolden said in the statement, "and it reaffirms Mars as an important future destination for human exploration."
From NASA:

Dark, finger-like features appear and extend down some Martian slopes during late spring through summer, fade in winter, and return during the next spring. Repeated observations have tracked the seasonal changes in these recurring features on several steep slopes in the middle latitudes of Mars' southern hemisphere.

This animation includes images that, according to NASA, span "from early spring of one Mars year to mid-summer of the following year." They were taken by the High Resolution Imaging Science Experiment (HiRISE) camera on the MRO.
Click here for more on the images.
Credit: NASA/JPL-Caltech/Univ. of Arizona 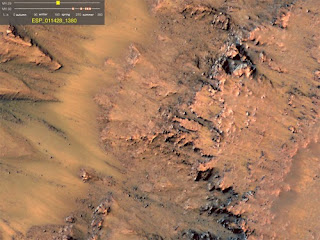